You'd never know that high school students can have inhibitions about Shakespeare when watching the productions put on by both sessions of our summer Shakespeare Intensive for Teens. The intensive (or 'SIT' for short) is open to rising 9th graders through rising college freshmen, and the name fits: it's intense.

These dedicated teens give four weeks of their summer to spend 7 hours a day with us, 5 days a week, to get a taste of just about everything there is to know about performing 'Original Practice' Shakespeare. They do in-depth analysis of Shakespeare's text and study Elizabethan dance, madrigal singing, audition technique, clowning, stage combat...the list goes on. Then the really cool part: at the end of the four weeks they perform a nearly full length production of a Shakespeare play on our professional main stage (not to brag or anything, but as far as I can tell we offer the ONLY theatre summer camp in town that lets participants perform on our professional stage, in our professional costumes, with lighting design by our professional lighting designer, you get the picture.)

This summer SIT Session I performed Macbeth, while Session II performed The Merchant of Venice. And the best thing about these two productions? Secondary characters from both plays, and the young actors playing them, really had a chance to shine. After watching the SIT Macbeth you remembered not just Macbeth and his wife but the Porter too (and Malcom, and Hecate, and plenty of other juicy roles that don't normally get a lot of attention.) Likewise, in many professional productions of Merchant the roles of the Prince of Morocco and the Prince of Arragon, two unsucessful suitors hoping to marry Portia, either suffer drastic reduction or can come across as deadly dull. Yet as one of many examples of 'no small parts' in SIT's production, the two princes' scenes showcased some of the most memorable moments in the play thanks to a crew of fabulous young comedians. In our education programs we do our best to drive home for students that everyone, every single person, involved in a production is important...it's great when we can drive that home for the audience, too.

Just a few of many favorite shots from Merchant and Macbeth: 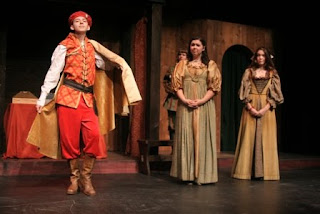 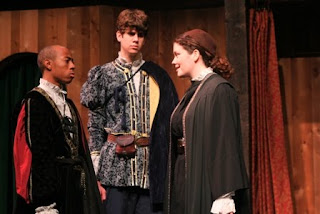 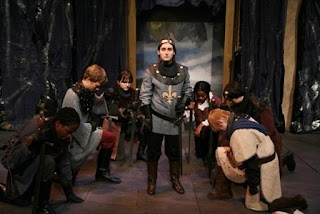 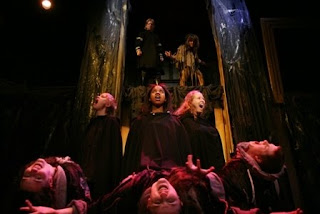 -Kristin Hall, Education and Development Coordinator
Posted by The Shakespeare Tavern® at 12:25 PM