Of Superheroes, Swords and Humorous Suitors, Part I

While the tail end of this summer might have seemed all quiet on the mainstage production front, at the end of July we wrapped up our most successful summer yet here at the Shakespeare Tavern's Education Department.

For one thing, this year we had enough demand to create a second session of our newest summer day camp, "Shakespeare Superheroes," for ages 8-13. The camp uses pieces of Shakespeare's text as a gateway to explore the arts: acting, singing, dancing, and even arts and crafts (for example, the masks worn by Macbeth's witches in the sessions' final performances were made by the students.) At the end of two weeks, the 'superheroes' get to produce a final performance on our professional stage that's based on two of Shakespeare's plays. This year, the plays selected for both sessions to explore were Macbeth and Much Ado about Nothing...and can you say 'adorable?' What really struck me during the final Superheroes performances for each session, though, was not how cute but how good these kids were, how well they took to Shakespeare's language. To watch a fifth grade girl deliver a Lady Macbeth soliloquy in a way that clearly tells you she comprehends and feels everything she's saying just as much as an actress three times her age--that's something pretty special.

Which brings home something that the Education Department has known for a while now: elementary and middle school students take to Shakespeare just as well as, and at times maybe even more readily than, high school students. They have boundless enthusiasm, few inhibitions and--as our Superheroes instructors learn anew each session--inexhaustible amounts of energy. Personally, I think it also helps that younger students probably haven't had as much time yet for parents, teachers, and society in general to tell them that Shakespeare is 'difficult' and 'boring.'

These are three of my favorite pictures of the performance by Session 2, a fun action sequence that shows Macbeth slaying Young Siward (with an air broadsword, of course.) 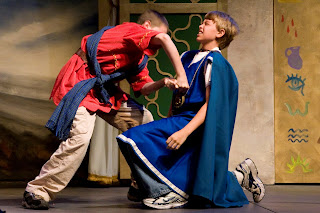 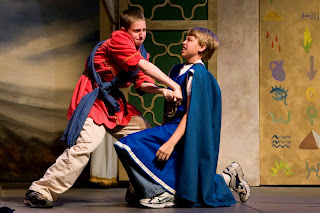 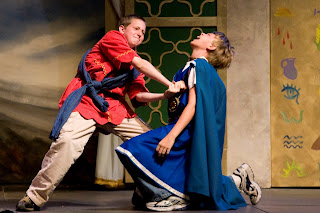 -Kristin Hall, Education and Development Coordinator
Posted by The Shakespeare Tavern® at 11:51 AM