A quaint interview with young Juliet 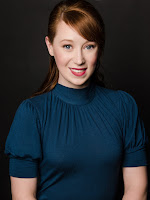 What is your name and character?
My name is Hayley Platt and I am playing Juliet (and Gregory too, so I get to have a swashing blow!).

Where did you go to college?
I went to the University of Georgia and received a B.A. in Theatre Performance and Classical Culture.

How long have you been acting with the Atlanta Shakespeare Company?
I was a Tavern Apprentice in 2012-2013, so this is my  fourth season with the tavern.

What was your first encounter with Shakespeare?
I barely remember a time I didn't have Shakespeare in my life. My mom, Carol Platt, has ingrained Shakespeare (The god of my idolatry) and a love for his work into me for so long I don't feel like myself without it. I remember being about 7 or so and watching the Zeffirelli Romeo and Juliet with Mom, I demanded that we act out the balcony scene and proceeded to climb the bookshelf so I could be Juliet from the top of my bookshelf balcony. Mom would quote Shakespeare all the time and she would put on different film versions from the BBC for me to watch as well. I would have to check with her but I'm 90% positive my first live Shakespeare was at the Shakespeare tavern in the late 90's.  Probably A Midsummer Night's Dream because after Juliet, Puck has always been one of my favorites. Now back to my Mom, she was the first one to not only mention acting to me but to encourage it, however what I loved about her encouragement was that she never pressed or pushed her thoughts on me. She would lead me with a quick, "Hayley, there's this audition...." or "Oo, your school is doing this, and I know your busy but maybe...". She always encouraged me to try and that was the big thing, you might feel overextended with other commitments but even if you think you have no chance at a part, you should try

Now, working at the Tavern has been a childhood dream for a long time. I never thought I would do it, but when I checked off a few other childhood dreams (Working for Disney, Traveling the World, Tried being Indiana Jones a.k.a. studied Archaeology for three months in Greece, etc.), I decided to tackle this one. I had finished touring, gone back to finish my degree, and I knew I wanted to stay in Atlanta, so I only auditioned for one Theatre company, The Shakespeare Tavern. The Tavern has been a place for food, fun, and many memories most of my life and I couldn't think of another place I would rather intern with.

What is you favorite memory so far of being on stage?
My favorite memory on stage, could you pick a harder question? There are so many, first one is a more recent memory during Midsummer when the fire alarm went off, the fog juice didn't go and so the dry ice smoke set off the alarm. This went on through most of the last part of the show, and sharing that moment with Matt Nitchie while he poked Titania (Mary Russell) in the cheek while beeping along to the alarm about did me in, thus the sound continued up until, "Fairy King attend and mark, I don't hear the fire alarm?!". One other Matt Nitchie inspired favorite moment is during MacB, he was playing my Dad, Banquo and I as his son Fleance came running out going up the stairs, and fell flat on my face. Without missing a beat, Matt, as my dad, picked me up by the scruff of my neck, brushed me off, ruffled my hair and continued to speak his lines. I don't know if he heard the many "aw, that's so sweet!" comments from the audience but from my point of view it was adorable and sweet and it showed our relationship as Dad and son so well and covered my embarrassment.

Have you ever had am awkward moment on stage?
Awkward moment? Well, I have one from 2014 when I was in the Alliance Theatre's "The Tall Girls". Now since I am 5 ft tall it was very funny to be in this show, but it was imagery for walking tall. Anyway, the play was about a girls basketball team in the midwest in the 1930's, so we actually played a basketball game with a hoop and everything during the show, with alternate dialog depending on who scored and which plays I called as the point guard. This one time (it happened more but never to this extent), the ball flew into the audience, since this wasn't the Shakespeare Tavern, we had a fourth wall, so up till this point we had ignored the audience completely. All of a sudden five frantic girls rushed the audience. We continued grappling and stealing the ball over the audiences heads, falling into little old ladies in their dresses, and men in their suits, it was chaos. My character Puppy was the nervous type so instead of grappling for the ball I went from patron to patron apologizing continuously in my characters voice and mannerisms. In fact I spent so much time apologizing I didn't realize that the game had resumed on stage until the other four girls yelled, "PUPPY!" across the stage and the audience. It was a strange moment of being Hayley and realizing I was no longer in the show and Puppy realizing she had "disappointed" her teammates. It's a good memory but I still blush thinking about it.

What do you hope the matinee students take away from the performance?
I love education performances at the Shakespeare Tavern, for many Atlanta students this might be their first live show. I love being a part of that first memory. I hope that what they take away from this show is that Romeo and Juliet aren't stupid and rash, they are desperate. I want students to be swept away in their series of unfortunate events. I hope that they leave with a new appreciation for communication (between family and friends), poetry and it's power, and above all belief in themselves that words which are the smallest of things have the biggest impact. This is a tragic tale of what can happen if you hold onto hate instead of embracing love. Yes, Romeo and Juliet is the title but the story is about two families, of which R&J represent, and how much it costs these two factions before they realize what they need to cherish, not reputation or their own wounded pride, but their family and friends. 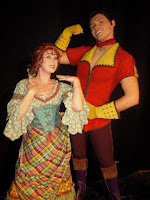 What other types of performances have you done in your career?


Oh, the stuff I've done from Disney to concept Shakespeare, Bollywood to African Jazz. The styles change but the purpose of entertainment doesn't. Entertainment gives pleasure, pause, and revelation. If for two hours I can make you forget the world outside of this story and let you leave thinking or yearning, then for that two hours traffic on this stage, it will have been well worth it.

What does it feel like to be in one of Shakespeare's most famous works?
Judi Dench said; for an actor, Shakespeare is a bottomless well. You can do the play a hundred times and it might take till the 100th performance before you find the perfect way to phrase a line, at least for that moment. Above all I am humbled to play this part, I have seen many Juliets, both on stage and in film. This play is a memory for every person who sees it because trust me every person in that audience knows something about this play. It's not like Marina in Pericles where no one knows what to expect, everyone has an expectation of what "their" Juliet is like. Is this daunting? Oh yes. But is it scary, no.

Because everything I need was written 400 years ago, every breath, every nuance, every bit of information I need to know is right there in the text. All I have to do as the actor is breath life into every line, tell the story, rides the waves, and know that i have done my homework. I may not be every person's vision of Juliet, but I know that I have created something I am proud of and if you are in a famous Shakespearean work or in a brand new play, that is all that you can ask of yourself, that you are proud to perform and share what you have created. I am besotted by Shakespeare, I hope to ignite many hearts and souls with my performance and I am so grateful to Jeff for the opportunity to do so.