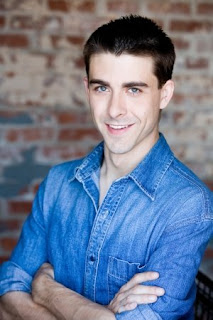 Paul Hester joined the Shakespeare Tavern as a member of the 2003-2004 Apprentice Company. He was called back from a General Audition and he says that he really liked the feel of the Tavern the first time he ever saw a show here. After his apprenticeship, his big break at the Tavern came when he was cast in The Mandrake, which was also his favorite classical comedy here.

Paul has always wanted to entertain, though he was never quite sure in what way until he moved to Knoxville at the age of 14. He was visiting the high school that he would be attending and sat in on a drama class. The teacher had him join in with some improv and he had “the best time he had had in school ever.” From there, Paul became active in theatre and eventually attended Wright State University, earning a BFA in Acting.

Paul’s favorite non-Shakespeare role so far was Guildenstern in Tom Stoppard’s Rosencrantz and Guildenstern are Dead.

Paul hopes one day to play Treplyov in Chekov’s The Seagull. He says that he is really intrigued by the relationships in the play. It is a very tragic role and Paul would like to “take that ride”.

Paul would love to (but never will) play Aaron the Moor in Titus Andronicus. He would also like to play Henry V or Iago in Othello.

When asked about his favorite Shakespeare quote, Paul says that he has a monologue in mind of Hermione’s from The Winter’s Tale that he finds striking. He likes the monologue because in it Hermione “shows strength and resolve in the face of oppression and tyranny”.

In the future, Paul wants to be the most diverse actor he can be. He would like to work on some contemporary non-Shakespeare classical plays. He finds himself less drawn to film and television, but he says that he wouldn’t turn down a chance to be in a Joss Whedon show. Paul is moving to Minneapolis in the Spring and hopes to spend a month or so next year in New York City. He says that he “doesn’t want to do one thing his whole life.”

Something you didn’t know about Paul? He is very into turn tables and is a hard core scratch DJ in his spare time. He is into “real” hip hop and likes to go and home after shows and scratch to wind down.

You can see Paul as Bob Cratchett, Topper, and a narrator in A Christmas Carol during December. He says that he is greatly enjoying the role as it is “something new to chew on”.

Other featured actors appearing in A Christmas Carol include:

-Redd Horrocks-Maier
Posted by The Shakespeare Tavern® at 5:30 PM 3 comments: