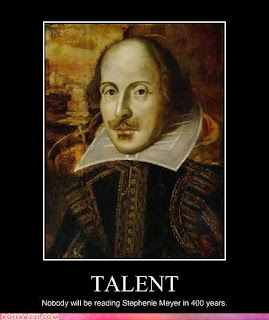 (Click on it to read the small type. No offense to you "Twilight" fans...)

We've got some great photos from our past 25 years as The Atlanta Shakespeare Company and our 20 years at The Shakespeare Tavern. Here are two: 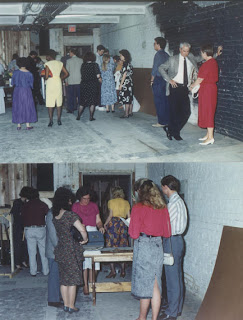 This is our lobby when we first opened 20 years ago. See that table? That's the Box Office! 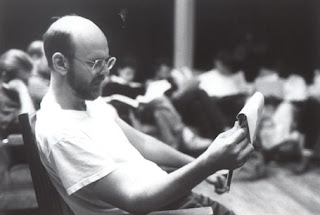 Here's Jeff Watkins in rehearsal many many years ago!

Is there a picture from our past you'd like to see? Let me know!
Jeanette@shakespearetavern.com

About ten minutes before the show tonight, our beloved Paul Hester was feeling a wee bit off. His stomach was hurting him a little, but he thought he would be okay and we started the show as usual. Complete Works is a very fast paced show with a lot of running around. Paul has a lot of costume changes. As he came off for each change, he said that his stomach was getting worse and worse, and he was concerned he was going to pass out. At this point he was also getting very sweaty and shaky. He was asked if he wanted to stop and he was determined to keep going, but after we got to The Scottish Play, it was clear that he wasn't going to make it and he barely made it to the bathroom in the mens dressing room before vomiting.

We stopped the show to take care of him, and a lovely nurse named Leighanne who just happened to be at the show came down and helped us out. It was determined that he would need to go to the hospital and we took him across the street (yay for proximity!) to the Emergency Room. As we waited there for him to be seen, he started feeling a little better and his color started coming back. He was taken back to be seen and all of his vitals were normal. The doctors took blood and ran some tests, and determined that it was either a nasty case of food poisoning, or the result of some antibiotics he was taking for an ear infection. They decided to discharge him so he could go home and rest.
He will be just fine and he felt absolutely awful about having to stop the show. Actors never like to give an audience a bad performance, and he is beating himself up quite a bit for that. But, as we kept telling him, he is human and when most people get sick at work, they get to take themselves home. It's a little harder when you're one third of a three man show.

So, Paul will be just fine but please do send him happy healing thoughts. We apologize for any inconvenience to those patrons and thank you very very much for your patience and understanding. We hope that we'll see you at the Tavern again soon.

Also a huge thanks to volunteer Josh for helping us get Paul across the street, and to Nurse Leighanne for helping us take care of Paul. You are both so very very appreciated by all.