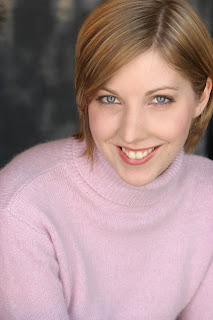 Mary Russell has a long history with the Shakespeare Tavern. At first, Mary could be seen running around the building as a Volunteer when she was a senior in high school. Then, she auditioned for the 2002-2003 and 2003-2004 Apprentice Company. She became a “Grasshopper” in 2003 and since then she has been a regular face on the Tavern stage since then, becoming an Artistic Associate in 2007.
Mary is currently performing as Helena in A Midsummer Night’s Dream, a character she enjoys because she feels that Helena goes with her emotions, knows what she wants, and figures out how to get it.

Mary was born and raised in Georgia. She has a BA in Theatre with a Minor in English from UGA.
She has been working in theatre since college, but was inspired to do Shakespeare by Helen Mirren’s 1978 role in As You Like It.

She found the transition from being a Volunteer to being an Actor on stage a challenge because “It was hard to get over the volunteer vibe”. More challenging than that, though, was when she had to take over the role of Helena in A Midsummer Night’s Dream with just four days notice back in 2004.

Mary’s favorite past Shakespeare role was Kate in Taming of the Shrew. She says that she really felt that she connected with the character.
Her favorite non-Shakespeare role was drastically different though. She played Karen in Voices Deaux at Multishades at Theatre Decatur, In this avant garde play, Mary played Karen, a military cadet. This intense role required her to undergo rigorous physical training and to get used to learning contemporary dialogue. She was scared that she wouldn’t be able to do it, but enjoyed the challenge and felt great about the role.

Her dream role would be Rosaline in As You Like It, which hearkens back to her first initial interest in Shakespeare. If she were a musical performer, she would love to play Roxie in Chicago.

She is inspired by the work of Helen Mirren and Johnny Depp.

So what does the future hold for Mary? She would like to stay in Atlanta another five years and continue to work around town. She’s been thinking about going to work in Chicago, but finds the weather off-putting. She would also love to go to Los Angeles and work in TV, especially Sitcoms or Episodic Drama’s. Mary says she likes the structure of the work.

"We are such stuff
As dreams are made on; and our little life
Is rounded with a sleep."

Something you didn’t know about Mary? She had to wear braces for seven years.

-Redd
Posted by The Shakespeare Tavern® at 2:09 PM No comments: