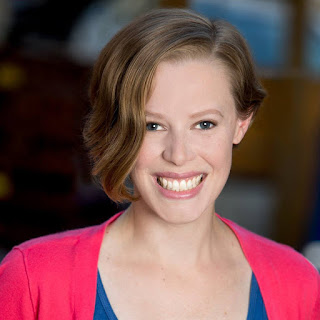 Greetings from the forest of Arden! We've entered our final week of As You Like It here at the Shakespeare Tavern Playhouse. Weirdly enough, our final week also marks our first week of student matinees! On Tuesday and Wednesday, we performed for 300 students. Confession time: When it comes to performing at the Tavern, I am always more nervous about student matinees than I am about evening performances.
Being the nerd that I am was a lot harder when I was in school. I've been “more than common tall,” as Rosalind says, for as long as I can remember. My personal style included oversized Hawaiian shirts from the mens' section of Kohl's. I wrote a lot of Harry Potter and Lord of the Rings fanfiction. Fortunately, I've always been lucky enough to have a merry band of fellows in nerddom surrounding me. The girls who have been my best friends since middle school are the same girls that sat beside me in the balcony on our first field trip to the Shakespeare Tavern back in 2003. We ate those amazing cheesecake brownies, drank ginger ale, and I made a vow that I would one day end up on the Tavern stage.
Even with that amazing core of friendship in my life, I struggled to feel at home in my own skin as a teenager. The boys at my school certainly didn't know what to make of me. I was tall, I was loud, I was bossy, and I was smart. A male classmate told me once very seriously that no one wanted to date me because I was so outspoken. Even at age 26, I think of that classmate when I am around high school students. I imagine they can smell the nerd fumes coming off of me. When I perform for high schoolers during matinees, I still worry that they're sitting in the dark and making fun of me.
Rosalind is tall. Rosalind is loud and bossy and outspoken and smart. I cannot believe that I have been fortunate enough to portray her for almost nine weeks altogether over the course of the 2015-2016 season. When our director Andy sent me a text that read simply “Rosalind in June?” last spring, I was both panicked and thrilled. At the time, I didn't relate to Rosalind. I thought she was better than me. Prettier, wittier, and ultimately more deserving of love. Between the initial run of As You Like It over the summer and the current remount, I have found so much joy and peace in realizing the things that I think she and I have in common.
Playing Rosalind is like fulfilling a million different childhood dreams at once. At different points in the play, I get to channel a Disney princess, Hermione Granger, Carol Burnett, and even Ron Swanson from Parks & Recreation. But I also get to channel Dani, which didn’t used to feel like a dream at all. As Rosalind, I get to be weird and tall and loud and passionate, and I still get to kiss the kind, beautiful guy at the end. And if the audience is laughing at me, it probably means that I did something funny.


As I type this, there are three more performances of As You Like It. So, come on down and laugh at us, students and grown-ups alike! If you have already seen the production, thank you so much for laughing or smiling or applauding or saying nice things to us in the lobby after the play. You have made this tall nerd deliriously grateful and happy.

Dani Herd
Posted by The Shakespeare Tavern® at 9:19 PM No comments:

Changing the World with Shakespeare! Ted talk with Guy Roberts

Also, here is a link to the Shakespeare Theatre Association website!

Posted by The Shakespeare Tavern® at 3:00 PM No comments: