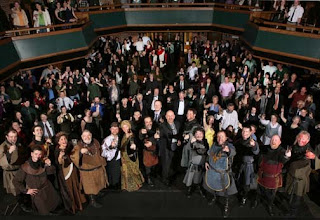 As we come to closing weekend for our productions of The Two Noble Kinsmen and Edward III, I’ve been looking back on our Canon Completion Project and realizing how much debate—the good kind of debate—tackling these plays has brought into our theatre. With these last two plays we’ve reached the very fringe of Shakespeare’s work, and new questions and phrases not often heard around here have found their way into the building: “I don’t think this is Shakespeare.” “I don’t know, feels pretty Shakespearean to me.” “This is definitely a Fletcher bit.” “Why do you say that?” And so on.

By now you might have seen this great Associated Press article about our Canon Completion Project in any number of places:

I love the way this article highlights the debate among scholars and artists about what to include or exclude from Shakespeare’s body of work. I also love Jeff’s response that we hope to make the question moot by producing every single play that scholars think Shakespeare might even possibly have had a hand in writing. If that’s our goal, then the debates within our company and our audience alike seem sure to rage on. Both Edward III and the upcoming Double Falsehood have indirect connections to Shakespeare at best: the first was published anonymously and the second, an adaptation, was published a hundred years after Shakespeare’s death by a playwright who claimed to have seen a copy of the Shakespearean original.

Scholars and artists have argued for years over the authorship of these two plays, and our own company is no different. Although all the artists here at ASC unite in their excitement about tackling these plays, every actor has his or her own take on how much poetry can be labeled the Bard’s. Our Artistic Director feels that Shakespeare wrote Edward III alone. But actors in the company who have worked on the show all have varying opinions of their own, as this video shows:

Personally, I’m thrilled that our journeys into the far corners of the Canon have inspired us to ask important questions: How do we go about deciding what’s Shakespeare, and what isn’t? What trademarks of Shakespeare’s plays can we say are uniquely his, and which characteristics can we rely on when trying to decide the authorship of an anonymous play? Does it become easier to decide when you see or hear the play on stage? What do we mean when we say that a line or speech ‘feels’ like Shakespeare?

My guess is that producing Double Falsehood, which takes the stage for 2 weeks in June, will only intensify this kind of questioning. That production looks to be one of the coolest, most experimental projects we’ve taken on in a while. Stay tuned here for more details!

Posted by Kristin Hall
Posted by The Shakespeare Tavern® at 1:12 PM No comments: