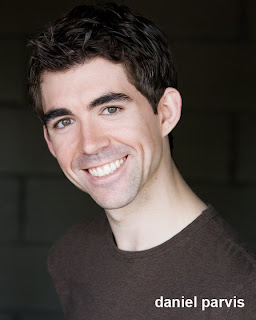 A former member of the “Worker Bee” Apprentice Company of 05-06, Daniel Parvis will be a fixture on the Tavern stage for our next three productions, Of Mice and Men, A Midsummer Nights Dream, and Rosencrantz and Guildenstern are Dead.

During his childhood, Daniel moved back and forth between and . He moved to Georgia when he was ten, then went back to Texas for his first two years of college at Southern Methodist University, before moving back to Georgia to receive a BA in Theatre at UGA in 2004. Daniel told me that joining the Apprentice Company really made theatre a focus in his life.

Since completing his Apprenticeship Daniel has been on stage at the Shakespeare Tavern many times with roles in A Midsummer Night’s Dream, Troilus and Cressida, The Merry Wives of , Love’s Labour’s Lost, The Taming of the Shrew and King John.

His favorite role so far in Shakespeare was the 2007 production of The Taming of the Shrew where he played Biondello. In Non-Shakespeare, he enjoyed playing Lucky in Waiting for Godot at the .

His Dream roles are Iago in Othello, Mercutio in Romeo and Juliet and Tom in The Glass Menagerie.

When I asked Daniel what his favorite line in Shakespeare is, he responded with a line from Love’s Labour’s Lost:

“Love’s feeling is more soft and sensible than the tender horns of cockled snails.”

Daniel says that he is happy in , but would like to work more in film.

Something that you didn’t know about Daniel? He cheats at Monopoly every time he plays. Oddly enough although he may be stealing from the bank the entire time, he never wins.

Posted by The Shakespeare Tavern® at 1:59 PM 6 comments: