Interning with the Atlanta Shakespeare Company 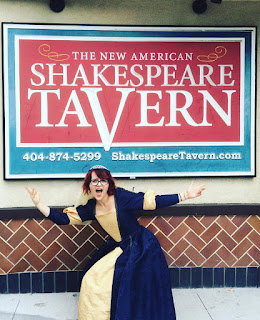 Hi everyone!  I’m Sidney, and this summer I am the Superheroes intern for the Shakespeare Tavern Playhouse.

This first June session, I worked with Katie Wine and Kathryn Lawson as teaching artists at our Decatur location of Shakespeare Superheroes.  We had nineteen phenomenal kids who in just two weeks learned the epic, intricate stories of both King Lear and The Taming of the Shrew.  On day one, we got to know each other, began to understand our plays and did a little acting with Story of the Play, and played many fun games together.  All of the children got their scripts on day two, and by day three some had even already memorized their monologues!  I was so impressed by the diligence and hard work these children put forth in memorizing their complex lines and comprehending their characters in just two weeks.  I never expected such professional attitudes of children ages six to fourteen, plus with the added silly bonus of the joy and energy children bring to the stage.

I brought some of my own personal experience teaching to the camp by introducing Mad Libs as an entertaining way to take our stories and have some fun with them!  I created six pages per show with blanks for adjectives, nouns, verbs, and adverbs, and the kids themselves invented hilarious scenes and then split off into the roles to act them out for everyone!  It was a way for them to further understand relationships and become more familiar with the characters, and also to have some very silly fun.  Our angry line, “O, Goneril!” became, “O, mashed potatoes!” and was certainly a hit for the rest of camp.

How do children this young understand the Shakespearean lines they are saying?  My fellow teaching artists and I work hard to help these kids come to their own conclusions through Directing by Asking Questions.  This has been my first experience with this type of teaching and directing.  I have personally always had directors in the past that just tell the actor where to go with no actor input or motivation behind it.  Directing by asking questions allows the children to grow through the process and have individual discoveries and develop the tools to help them understand more text themselves in the future.

The imagination and creativity of these students was so inspirational.  They really got into their roles and committed to their performance with such strength and passion.  They even used the art supplies we had to make some of their own props and invitations, such as construction paper swords for knights, sparkly pipe cleaner jewelry for the wealthy, and their own posters advertising their shows. 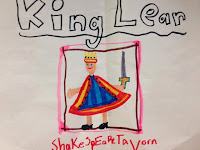 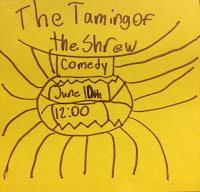 I definitely learned a lot with the performance process as well.  With thirty-two scenes, nineteen children who had at least four costumes each, over ten quick changes, and six difference places they could enter and exit from, it was… hectic!  I took a lot of initiative backstage in managing everyone by writing down every single entrance and exit in my script, and even putting together a Master Entrance sheet for my helpers to follow when we got to the Tavern the day of our performance.  I made sure everyone was in their places a scene or two in advance to enter from stage right, stage left, and center, and made sure there was some extra assistance for some of our six year olds with their entrances and exits.  The final performance was incredible, and I am so proud of every single one of them.

It was such a delight to watch these children learn and grow over the past two weeks.  They overcame their nerves and confusion to put on an absolutely beautiful production.  Even if some of them do not pursue Shakespeare after this camp, they still learned team work, communication, reading comprehension, confidence, and had oh so much fun.

Submitted by Sidney Marie Joines
Posted by The Shakespeare Tavern® at 2:36 PM No comments: