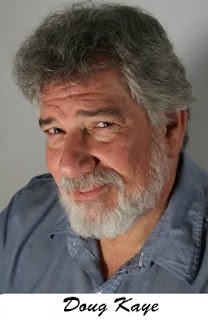 Veteran Tavern company member Doug Kaye is no stranger to Shylock: he's played the character three times and earned a Suzi Awards nomination for his last Shylock on our stage. Over the course of his career--which includes a 'Merchant of Venice' with our company back when we were still setting up stages at the Excelsior Mill, in 1986--he has performed more roles in 'Merchant' than in any other Shakespeare play. It's safe to say he knows the play pretty well. Kristin Hall recently sat down with Doug to ask his thoughts on one of Shakespeare's most controversial and complex characters.

What have you discovered about this character over the three times that you’ve played him?

It hasn’t changed my opinion of the character. I love getting into the language, the language is wonderful, and discovering what things these speeches actually do impart. I think I’ve realized this time that a lot of what Shakespeare puts in the trial scene for Antonio to say against Shylock is the same kind of thing Antonio himself has been doing to Shylock, and all of the Jews of Venice, up to that point. Total hypocrisy. Another thing I’ve realized this time is that Shylock would have had a better chance at getting further in his trial if he had used the argument that he uses in Act 3 Scene 1--but he wastes that argument on Salerino and Solanio, who are bigots. If he’d used that argument on the Duke and even Portia, he’d have had a better shot.

Have you focused on different aspects of the character each time you’ve played him?

Actually, one of the reasons I’ve been disappointed with other Shylocks in the past is that there’s been too much of a consistency throughout the entire play, there’s no arc. They start off with determination and keep it. What I discovered the first time I did it and have continued to explore over the years is the fact that every scene that Shylock is in--and there’s only five of them--every scene is a different aspect of this guy’s character, there’s a little different part exposed. And in the beginning scene, even though the treatment he’s gotten from Antonio really gripes him, he’s trying to shove that to the back of his mind. He’s trying to make friends and do this favor for Antonio, take as he says ‘a doight of usage,’ ‘not a speck of interest’ for this loan. When he sets up this horrible bond he says it’s a joke...and it really is a joke, he has no inkling that he’s going to be able to collect on it. And I think the most sinister aspect of why he comes up with this bond in the first place is so that at least for the time Antonio has this loan out, Shylock will have that this bond in his hand and be able to say to himself ‘I have Antonio in my back pocket, look at this.’ But he doesn’t dream that it’s ever going to come to fruition. And even when he comes to court, he refers to it as a “losing battle.” He doesn’t think they’ll let him get as far as he does.

So you think he goes all the way to court mainly to make a point?

To teach a lesson. But then, when he realizes that they’re going to actually let him do it...wow. And that’s when he goes too far. That’s when he steps over the line. His determination, his fury appears when his daughter has betrayed him.

For your Shylock, that’s the turning point?

That’s the turning point. It’s two weeks before the bond will be due at that point. Salerino and Solanio say that Antonio’s ships are in trouble, and they have to think that things are looking bleak for him since so many things are going badly for him. But it’s still two weeks away. [Shylock] tells Tubal, “Fee me an officer. Bespeak him a fortnight before.” You know, ‘We’re still two weeks away but get me that officer, because I want to jump on this if he’s not able to pay.’ Antonio becomes the scapegoat. Even though Shylock’s already got a legitimate gripe against Antonio’s behavior towards him, it’s the final encouragement of Antonio and Bassanio’s friend, who has stolen away his daughter, that pushes him over the edge. And it becomes ‘one bird in the hand is worth two in the bush’: the two, Lorenzo and Jessica, have escaped, but the bird in the hand is Antonio, and that’s where all Shylock’s revenge then goes.

Yes, the ultimate bad stuff. And of course in Shylock’s mind, [Jessica’s abduction] is Antonio’s fault as well. As far as he knows, Antonio has been baiting all of his friends to treat Shylock and his people badly.

If you still haven't witnessed Doug's portrayal of Shylock, you still have two more chances this weekend on January 26 and 27.
Posted by The Shakespeare Tavern® at 2:34 PM 1 comment: