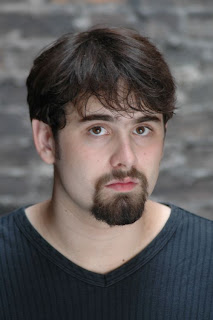 Jacob York is a new face here at the Shakespeare Tavern. He just graduated from our 2007-2008 Apprentice Company in April and has already been cast in our next two productions. Jacob will be playing a Tragedian in Rosencrantz and Guildenstern are Dead, and Claudio in Much Ado About Nothing.

Hailing from Kentucky, Jacob has spent the last few years traveling around the country working on different projects. He spent a summer with the Shakespeare Theatre of New Jersey, where he claims to have learnt more in one summer than he did in college. He has also done some stunt show work, and spent the summer of 2007 at The Lost Colony in North Carolina.

He auditioned for the Shakespeare Tavern Apprentice Company because he liked the thought behind the Tavern. After auditioning, he was convinced that he had blown it because he lost his keys at our building and had several staff members running around searching for them. He thought that it might be a sign of weakness. However, he did of course get selected regardless of his issues keeping track of personal objects.

During his time with the Apprentice Company, he enjoyed text class immensely. He finds Shakespeare’s texts ethereal and liquid. He is also very fond of education, both learning and teaching.

In the future he would like to be a Professor and to teach college or groups of serious young actors. He says that he is a small town boy that misses his home, and has no intention of heading for Broadway or Hollywood.

Jacob’s favorite past roles are John Barrymore in I Hate Hamlet with Murray State University, Blue Ramada (a self-created character) at the Double JJ Resort Theatre, and Bottom in A Midsummer Night’s Dream, because “Everyone has a bad actor inside of them”.

Jacob’s dream role is Hotspur from Henry IV because he is a “loose canon raised in nobility”. From Hotspur also comes Jacob’s favorite line in Shakespeare, which is simply “My name is Harry Percy.”

A non-Shakespeare role that Jacob would love to play would be Hedwig in Hedwig and the Angry Inch. He confesses though that it is unlikely that he would play it because he doesn’t think he would make a good singer or a pretty girl.

Jacob is inspired by the work of Daniel Day Lewis, Ian McKellan and Patrick Stewart. As someone who is never without his headphones though, he notes that a lot of his inspiration comes from music, which is currently Ted Leo, Jens Lekman and Daft Punk.

In Rosencrantz and Guildenstern are Dead, Jacob will be playing a Tragedian. He says that he is excited to be working with the other Tragedians in the cast. He greatly enjoys working with Director Jeff McKerley, because he “makes me feel like a part of it”.

Something you didn’t know about Jacob? He has lived in 6 different states in the last 6 years.

Other previously Featured Actors in Rosencrantz and Guildenstern are Dead include: