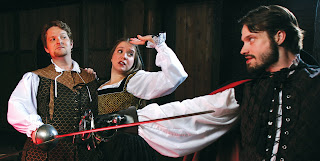 DISCLAIMER: This entry contains information and observations that could be classified as 'geeky.' If you love Shakespeare and history, read on.


Remember a few months back, when I said our production of Lewis Theobald's [and supposedly William Shakespeare's?] Double Falsehood was sure to make us examine exactly what we mean when we say “This is Shakespeare,” or “This is not Shakespeare?”

Man, has it ever. Actors, staff members, and audience members old and new have been asking those questions like mad. But leaving the debate about Double Falsehood’s authorship aside, I want to take a few minutes to tell you about some of the other geeky questions this production has given us a chance to ask. Questions like, “What would happen if, rather than giving each actor a full copy of the script before beginning rehearsal for this unknown play, we only gave each actor his or her own lines with a few words of the cue for each line?”

Partial scripts, called ‘cue scripts,’ were par for the course in Shakespeare’s day (and in Lewis Theobald’s, for that matter.) A 16th or 17th century actor working on a new play never saw a copy of the full script—he was responsible only for learning his own lines, and for knowing when to speak those lines by memorizing the few words spoken by another actor immediately preceding each of his lines (to use theater-speak, his ‘cues.’) He was given this information and nothing more, not even a synopsis of the play’s story. And since productions during this period had little to no group rehearsal beforehand, chances are he would go on stage to perform with no understanding of a larger context for his character’s lines. This means that a) he had to glean as much understanding of his character as possible based on that character’s own words, and b) he had to really, really listen to the other actors on stage with him to get a sense of what was going on.

We’ve talked about experimenting with cue scripts for a long time, but considering that none of the actors for ‘Double Falsehood’ were familiar with the play nor its plot ahead of time, we thought this would be the perfect opportunity to explore the experience of an early modern actor preparing for a newly-written play. This choice has led to a lot of interesting discoveries, including watching a ‘false cue’ in action.

Tiffany Stern has outlined how playwrights like Shakespeare and Theobald took advantage of the cue script rehearsal style, writing ‘direction’ for their actors into the actors’ parts (if you’re interested in this kind of stuff, our Education Department highly recommends her book Rehearsal from Shakespeare to Sheridan.) One way for a playwright to draw the emotion he wanted out of an actor was to write a ‘false cue,’ or a ‘premature cue.’ Dr. Stern does an eloquent and lengthy job of explaining this cool concept in her book, but since this is a blog I’ll do my best to explain it briefly.

Here’s how it works: an actor on stage would only know the last few words of his cue, without knowing the larger speech to which those words belonged. That actor would automatically start saying his line after hearing his cue. So if Shakespeare wanted that actor to say his line with lots of anger, he would write the actor’s cue into the proceeding speech multiple times…the actor would keep trying to say his line each time he heard his cue, only to be cut off by his scene partner. The example Stern uses is from Act III, Scene 3 in Merchant of Venice: after a long speech of Shylock’s, Solanio has an angry line calling Shylock nasty names. The actor playing Solanio came on stage only knowing that his cue to speak was ‘have my bond.’ Problem is, Shylock says ‘have my bond’ five times in the preceding speech…and each time Solanio would be trying to butt in, only to be cut off by Shylock, who would not have finished with his own speech yet. By the time it was actually Solanio’s turn to speak, the poor actor would be so frustrated and embarrassed at having repeatedly missed his cue that he would be feeling the right emotions to deliver his mean-spirited line appropriately. Shakespeare directed actors emotionally simply in the way he wrote the lines. Cool, huh?

I’m telling you all this because during the first rehearsal of Double Falsehood I happened to capture on film what I think is an example of premature cues at work (regardless of who wrote the script, it's still the same technique.) Bernardo, Leonora’s father, knows that something to the effect of 'poor Julio' is his cue to speak. She says that a LOT in her speech…and in the context of the play, it makes sense that he would try to keep cutting her off, only to answer angrily when it’s finally his turn to speak (I love how at the end of this video, Jacob York pauses before his line to make sure she's finally done.) Granted, because this was rehearsal rather than a performance everyone cracked up when the premature cue took its course rather than getting angry. But you can see how it might have worked in performance toward making both Bernardo and Leonora increasingly frustrated with each other.

And this is why I love the Shakespeare Tavern: you can have fun but learn new things at the same time. Double Falsehood has been an adventure all around, and there’s still another weekend to go!

Posted by The Shakespeare Tavern® at 5:12 PM No comments: