The three plays that comprise Henry VI are classified as histories, but they were never intended to be precise accounts of historical events.  These plays were not historically accurate biopics but large-scale entertainment meant to amuse, captivate, and inspire audiences with scenes of valor, cunning, passion, humor, and English patriotism.  Shakespeare drew heavily on the historical chronicles written by Edward Hall and Raphael Holinshed as sources, and he did accurately depict some historical events in Henry VI.  However, he frequently deviated from history when it suited his needs as a dramatist, omitting historical facts, condensing timelines, inventing characters, and embellishing historical incidents.

Shakespeare’s decision not to incorporate the historical Henry VI’s bouts of extreme mental illness into the plays bearing his name had a profound effect on the narrative of Henry VI.  The historical Henry VI was so incapacitated by illness that other government officials, including the Lord Protector, were forced to completely take over ruling the kingdom several times during his reign.  The tenor of the plays of Henry VI would be very different if Shakespeare had included depictions of Henry’s illness. 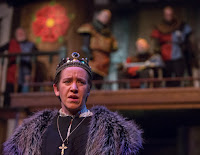 Instead, Shakespeare’s illustration of Henry as an incredibly pious, virtuous man who perhaps lacked the forcefulness required to navigate court intrigue and defend his crown, fit more with popular perceptions of Henry VI, who was revered and respected for his piety.  King Henry VII unsuccessfully attempted to have Henry VI canonized as a saint, and a popular cult developed around Henry VI during Henry VII’s reign.  Public regard for Henry VI steadily grew after his death, and Shakespeare’s depiction of the pious king would have appealed to many of his sixteenth-century audience members.

Henry VI, Part One provides a multitude of examples small and large of Shakespeare altering or adding to historical facts.  While we don’t have any personal writings in which Shakespeare explained his thought process, scholars have posited why Shakespeare might have been inclined to stray from historical details.  Sometimes Shakespeare changed historical facts because they were not crucial to the plot.  For example, the list of French towns that the English messenger says have been lost in the beginning of the play are historically incorrect but the intended effect of demonstrating that the English are losing the land that Henry VI’s father famously won in France remains.  Shakespeare invented new, fictitious characters like the Countess of Auvergne, whose attempt to imprison Talbot in her castle provides a moment of levity in the play and reinforces Talbot’s power in France.

Shakespeare greatly condensed historical events to create a play that covers decades of history in three hours; for example, Joan of Arc convinces the Duke of Burgundy to defect from the English in one scene in Act Three, whereas in reality his defection took place four years after her death and was the result of ten years of negotiations between him and the French nobles.  Shakespeare also relied on biased depictions of historical figures when he knew it would appeal to his audience; his portrayal of Joan of Arc as a conniving sorceress catered to a very pro-English, anti-French audience.

Shakespeare changed historical details to create scenes with higher stakes and dramatic intensity; whereas the historical John Talbot was one of Talbot’s several sons and was a grown man with children, Shakespeare’s John Talbot is Talbot’s sole son, and he is young and unmarried, making his death and the subsequent end of the Talbot bloodline more poignant.

Shakespeare continued the trend of choosing historical accuracy when it fit his needs as a dramatist in Part Two and Part Three of Henry VI.  Shakespeare overlapped historical figures who did not meet in real life to create tension; the shared dislike between Margaret and Eleanor is historically inaccurate because Eleanor’s disgrace and downfall happened four years before Margaret came to the English court.  Shakespeare established Margaret as a powerful, forceful woman at court immediately after her marriage, having her collude with Suffolk to bring down Gloucester and having her fight for power on Henry’s behalf, whereas the historical Margaret was only fifteen and relatively politically inexperienced when she married Henry, and she did not immediately get involved in power plays at the court.  The affair between Suffolk and Margaret was largely Shakespeare’s invention after he expanded on historical hints of Suffolk’s interest in Margaret.

Shakespeare invented York’s involvement in the Cade rebellion, and he drew more on the Peasant’s Revolt than the historical Cade rebellion in his depiction of the rebels, who, in reality, were reasonably educated middle- and upper-class artisans.  At the end of Part Two, Shakespeare incorporated the Duke of York’s son, Richard, into the battle, although the historical Richard was only two when the battle of Saint Albans took place.  That was not the only time Shakespeare changed a character’s age in Henry VI; in Part Three, he decreased the age of York’s youngest son, Rutland, which made his murder by Clifford more shocking. 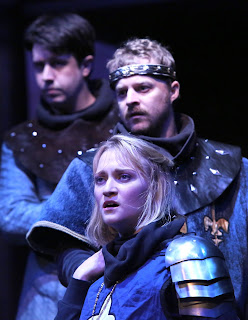 For the past several months, our theatre has been filled with the sound of words that are about 425 years old as our company worked to rehearse and perform all three parts of Henry VI.  I have looked on with admiration as the director, Jeff Watkins, and the cast worked ever diligently, filling the building with the sounds of their efforts.  York’s railings against the crown greeted me as I came to work and Henry’s lamentations reverberated around me as I left.  Trumpets sounded every morning and swords clashed every afternoon as fight choreographers created battles and actors practiced them.  And more than once, when I waited for a battle to finish so I could walk through the theatre, I pondered why these plays, sometimes criticized, often overlooked, and rarely performed, are still so compelling after four centuries. 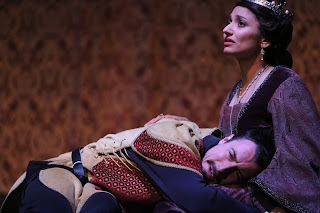 We all know that Shakespeare grew into one of the greatest dramatists the world has ever seen, and so it is fascinating to look on the three parts of Henry VI, the earliest history plays he wrote, and see glimpses of rhetorical features that became staples of his later, more famous historical plays, like the two parts of Henry IV and Henry V.  As he did in writing his other history plays, Shakespeare relied heavily on source materials like the historical chronicles written by Hall and Holinshed while crafting the three parts of Henry VI.  However, he showed his inclination to deviate from his sources and the historical narrative, making alterations that condensed great swaths of English history into plays that could be performed in three hours and making changes to historical fact to create more emotionally moving scenes and more compelling characters. 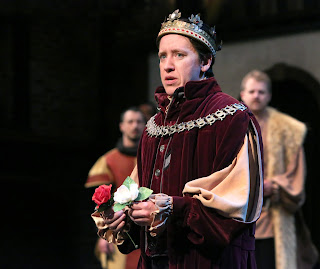 Through the conversation between Talbot and his son before they die in Part One, the moment Suffolk and Margaret share before he leaves England in Part Two, and the time Henry muses on his longing for a simpler life in Part Three, Shakespeare demonstrated his gift for creating deeply moving, if historically unfounded, scenes.  Through the depictions of pious Henry, ambitious York, and vengeful Richard, Shakespeare captured a spectrum of humanity and raised questions about duty to God, country, and family.  Scholars rightly argue that Shakespeare’s most nuanced work and best writing came after Henry VI, but the compelling narrative Shakespeare created in these three plays is a testament to his early talent. 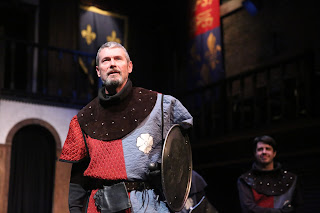 Ultimately, Shakespeare revealed in Henry VI his ability to create exciting entertainment that captivates modern audiences as much as it did Elizabethan spectators.  With ambitious usurpers, family squabbles, court intrigue, broken allegiances, love affairs, murder, riots, witches, pirates, battles, and heads on pikes, the three parts of Henry VI are basically Game of Thrones with more poetry.  So pick a side, Lancaster or York, red rose or white, and join us as the Wars of the Roses play out at the Shakespeare Tavern Playhouse for the next two weekends.


Get your tickets here: http://www.shakespearetavern.com/index.php?/performances/show/hvi_rep_fall20163/.
Posted by The Shakespeare Tavern® at 10:54 AM No comments: