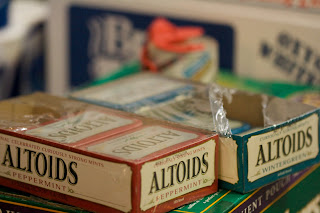 The secret fuel behind every performer.
Posted by The Shakespeare Tavern® at 4:15 PM No comments: 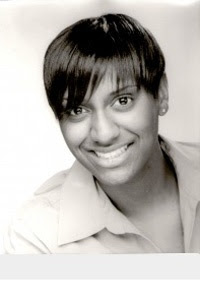 Tiffany Porter joined the Shakespeare Tavern as an Apprentice in 2007. She has been involved in Theatre since her early teens after discovering that she had a fashion issue with the Marching Band in high school and deciding that drama was more her style.
Tiffany has a Bachelor of Fine Arts degree in Professional Acting from East Carolina University.

After college, Tiffany performed in Raisin in the Sun and Cat on a Hot Tin Roof, and then came to Atlanta to audition for the Shakespeare Tavern. She auditioned on her birthday.

Tiffany finds, as many other actors do, that the most recent role she has performed is her favorite one. She greatly enjoyed playing Helena in A Midsummer Night’s Dream, and will be reprising the part on September 25th.

Her favorite non-Shakespeare performance was in Oesops Oh So Slightly Updated Fables. She enjoyed running around as a Butcher and making children laugh. Tiffany really enjoys teaching children.

In the future, Tiffany would like to play Kate in Taming of the Shrew.

Tiffany is currently playing Fabian in Twelfth Night through September. When discussing the character, she says “Fabian is the Yang to Mavolio’s Ying”. This is her first “breeches” role, where a woman plays a male character. She greatly enjoys working with Senior Company member Maurice Ralston, she feels that he is very giving as a scene partner.

In the future she wants to stay in Theatre. She considers herself a stage girl and says that her particular acting instrument is more suited to the classical style, which is why she enjoys Shakespeare.

Tiffany will be playing Charmian in Anthony and Cleopatra in October, a role that she considers “fiesty”. She will be playing Fabian in Twelfth Night through the end of September.

Something you didn’t know about Tiffany? She nearly didn’t take the apprentice at the Tavern because she has a phobia of bathrooms, and as an apprentice she had to clean them. She has a trade with a friend where her friend will come and clean her bathroom for her, and Tiffany will go and clean parts of her friend's kitchen.
In August and September The Shakespeare Tavern is performing Twelfth Night, A Midsummer Night's Dream, King John, The Complete Works of William Shakespeare (Abridged) and Much Ado About Nothing.
All of our previous Featured Actors are performing!
Posted by The Shakespeare Tavern® at 10:02 PM No comments:

Bards Eye View #5 - The Life of Our Fight Director 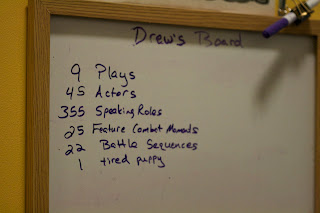 Photo by Redd
The message board outside of Drew Reeve's Office. Drew is our Company Manager and Fight Director.
Posted by The Shakespeare Tavern® at 2:14 PM No comments: