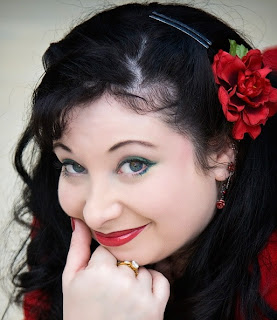 Rivka Levin is a woman of many talents. An accomplished actress and musician, she has been a friend to the tavern for over a decade, and began her work on stage here in 2005. She is currently performing in Twelfth Night as Maria.

With a BFA in Musical Theatre from and an MFA in Media and Performing Arts from The Savannah College of Art and Design, Rivka is a very experienced and highly trained performer. She is also an accomplished harpist and singer.

Rivka is an Atlanta Native. From a very young age she knew that working in performing arts was her chosen career. She first heard about The Shakespeare Tavern in 1996 when she was performing in a band with Matthew Trautwein, who was in a show at that time. She came to The Tavern as a patron and was excited because she feels that we “get Shakespeare right”. She continued to be an avid patron for years until she was a harpist in The Tempest and then was cast in A Christmas Carol in 2005. Eight months later, she was hired on as Development Director and because a full time member of the staff.

Since then, Rivka has also appeared in The Merry Wives of Windsor and Love’s Labor’s Lost.

Her role in Love’s Labor’s Lost has been her favorite Shakespeare role so far. She says that she fell in love with her character Jaquenetta and had the opportunity to really invent her. She also enjoyed the challenge of playing a character that wasn’t overly intellectual.

In Non-Shakespeare, she greatly enjoyed playing Cecily in The Importance of Being Earnest. It was her first experience with period theatre and her character was very witty and idealistic. In comparison, her other favorite role was that of Philimonte in Learned Ladies, a strong matriarchal character. Both shows were important to her as she felt that the casting was excellent.

In the future, Rivka’s dream roles are Beatrice in Much About Nothing “I get her. She’s in love with her own wit”, Desiree in A Little Night Music, and Genevieve in The Baker’s Wife.

As far as acting for the camera? Rivka did eight films at The Savannah College of Art and Design and would love to do other Independent Films.

Rivka’s favorite line in Shakespeare is from Much Ado About Nothing, a line of Beatrice’s that goes “But then there was a star danced, and under that was I born”.

When asked about her character in Twelfth Night, Rivka says:

"Maria (aka Mary and Marian) is a waiting gentlewoman to
the countess. She is clever, and loves a good practical joke. I've
discovered that she also has a temper, and is not afraid to speak her
mind. She obeys her mistress (Olivia), but also has some distinct
opinions on the choices Olivia makes. She is in love with Sir Toby Belch
(though she tries hard not to show it), and is amused by his
drunkenness, even at the same time as she counsels him that "drinking
will undo you". For all that she dislikes Malvolio and hatches the plot
to trick him into believing that Olivia loves him, she also has a soft
heart and comes to feel remorse for how far the game ends up going."

She also says that what she likes best about Maria is her sense of humor and her quick wit. She likes that the other characters clearly respect Maria’s cleverness.

Something you didn’t know about Rivka? She has a strong tomboy side that wants to climb trees and get muddy.

Something that you might know is that she is also one third of the popular Celtic Folk band Three Quarter Ale.

Posted by The Shakespeare Tavern® at 1:36 PM 3 comments: