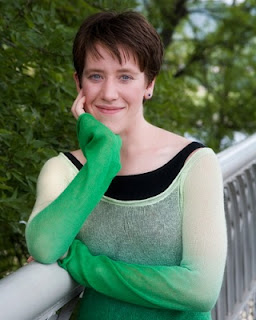 Mary Ruth Ralston has been with the Shakespeare Tavern since 2006 when she joined the 2006-2007 Apprentice Company (the Fruit Flies). She had just graduated with a BA in Theatre from .

Mary Ruth starting acting in High School. She had always been raised to be very playful. Her parents were imaginative and encouraged her by playing lots of games throughout her childhood.

In college, Mary Ruth chose to portray Lillian Hellman in Cakewalk for her senior thesis project. This was her favorite role. She says that Lillian is a crazy, selfish and funny person and that playing someone so far out of her age range was very challenging. She also felt that because she was portraying a real person, she had a responsibility to get it right.

Mary Ruth is currently playing Joan of Arc in Henry VI Part 1, which is her dream role in Shakespeare. She says that she “enjoys the outlandish take on her that Shakespeare had, making her a whorish witch instead of a saint”. She finds the whole role very fun, from mocking to all of the combat involved. She says that she believes that Joan thought that she was right and is impressed by the fact that a woman was able to command an army in medieval . Mary Ruth obviously has a lot of respect for Joan of Arc as a historical figure as well as a character in a play.

In the future, she would love to play Viola in Twelfth Night.

This month, Mary Ruth is also playing Margery in Henry VI Part 2. In December she will be joining the cast of A Christmas Carol.

When asked to tell me something most people don’t know about her, she replied “I have a scar on my tongue. This is why making faces at yourself in the mirror while standing on a plastic stool is a bad idea, kids”.

Henry VI Parts 1, 2 and 3 will be playing throughout November. Other featured actors appearing in these plays are:

Posted by The Shakespeare Tavern® at 4:18 PM