First Impressions from Working at The Shakespeare Tavern 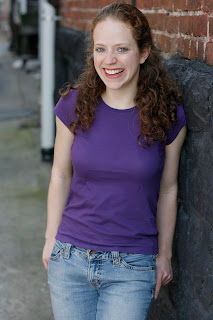 After a month as the new Education Development Coordinator for the Shakespeare Tavern, I can tell you that working for the Tavern is not your usual desk job.

For one thing, I’ve been a fan of this company for years, and I still can’t quite believe that I actually work here now. I find myself grinning as I walk into work because the first thing I pass on the way to my office is the Tavern stage.
That being said, I am still getting accustomed to the [fake] tortured cries of anguish that sound without warning through the wall beside my desk, as the cast of the Henry VI trilogy rehearses their battle scenes. Or yelling “Coming through!” every time I pass through the curtains that lead from backstage into the theater during rehearsal—a safety measure, used by the whole company to make sure that no one will come flying at me wielding a broadsword as they make a hasty exit from the stage.
The people I work with are talented and dedicated actors but also have a real talent for juggling different responsibilities. My coworker Tony Brown, for example, has recently been performing in or rehearsing for five different plays at once—Antony and Cleopatra, A Midsummer Night’s Dream, and the three Henry VI plays—on top of his job as the Programs Coordinator for our Education department. It’s still a bit strange to realize that as I waltz out the back door on my way to the car, having completed my 9:00-5:00 day, most of them are just beginning to arrive for a long night of theatre-making.
So far I have done a lot of watching, meeting, and learning. I’m excited to have had the chance to sit in on many rehearsals for the November Henry VI trilogy which, as a diehard fan of Shakespeare’s history plays, I have watched with no small amount of geeky bliss. There is always plenty to do at the Tavern and working here requires that you be, if not a jack of all trades, than at least a jack of lots of trades. One day I might be helping to teach high school students during one of our in-school ‘playshops,’ another day I might be working on a grant application to keep those playshops up and running, another day might find me spending a few hours sitting in on the Apprentice Company’s textual study class.
Working for the Shakespeare Tavern is much, much cooler than your usual desk job.
Posted by The Shakespeare Tavern® at 3:34 PM