We took some time with Matt Nitchie and Daniel Parvis to get the scoop on this year's production of The Two Noble Kinsmen.  Check it out! 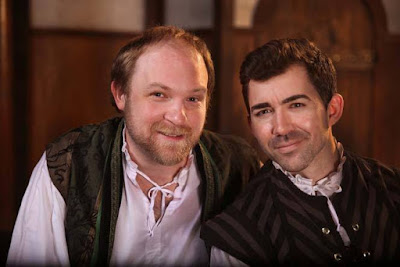 Who are you and who are you playing?
MN: My name's Matt Nitchie.  I play Arcite
DP: Hey, my name is Daniel Parvis and I play Palamon, a noble kinsman!

How long have you performed at the Shakespeare Tavern Playhouse?
MN:I've been with the Tavern since the '04-'05 apprentice year.  So about 12 years.  Yikes.
DP: Oh, a good 8-9 seasons, and a couple scattered shows over the past few years.

What did you enjoy about the previous production that was done five years ago?
MN: The ensemble, the story, and the music.  Working with Parvis.  Hell, the whole package.
DP: I really enjoyed the way that the company fully embraced both the comedy and tragedy of the play.   Not seeing the two elements as conflicting and potentially shying away from either element.  Going for broke with both!

What do you like that is different with this production?
MN: We were able to dig a bit deeper this time.  Refine some characterizations and such.  There's also some great new energy from our new cast members.
DP: I like the new additions to our cast, they're fantastic to work with, and I love making new friends.  I also like that I can play the mandolin now, I think I'd like to get one and keep playing.  I also like seeing how those of us who are returning have grown as actors in the five or so years since we last did the play.

What is one of your favorite moments in this show?
MN:  I think we came up with a very strong first moment for the show.  It's a great first step.  That, and the first scene of our second half.  It's such a juicy scene.  Oh, and the prison scene.  Man, there are a bunch of good bits in this show.
DP: One of my favorite moments is the prayer scene.  The speeches are beautiful, and we have some amazing music created by Clark Weigle and performed by the cast supporting them.  I think that it's a very powerful, moving moment in the show

When do you feel most connected to the character/audience?
MN: It can change nightly.
DP: I don't think I can say without spoiling anything!  But let's just say that I think I feel the most connected any time my character is acknowledging the love he feels for either Emilia or his fellow kinsman.

The Two Noble Kinsmen has one more weekend of shows.  Don't miss this show!


Posted by The Shakespeare Tavern® at 2:54 PM