What the heck are the Ides of March?

Hayley Platt, a member of our 2013 Apprentice Company and our resident Classical Civilization scholar, explains the definition and legend behind the Ides of March.

What were the Ides?

The Ides were simply part of a numbering system for the Roman calendar: the Nones referred to the 5th or 7th, the Kalends the 1st, and the Ides the 13th or 15th depending on the month. The Ides of each month was sacred to Jupiter, the father god or supreme deity of the Romans. In modern times, the Ides of March has become best known as the date on which Julius Caesar was assassinated in 44 BCE. Caesar was stabbed to death at a meeting of the senate, in an assassination involving as many as 60 conspirators led by senators Brutus and Cassius. 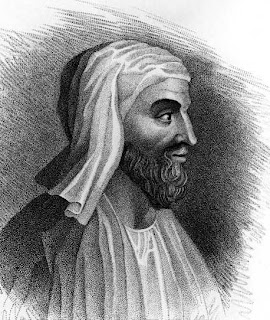 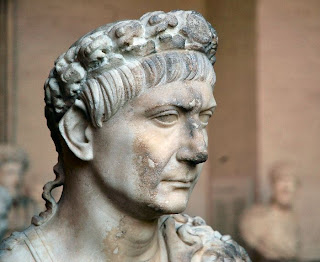 Ancient Roman writers Plutarch and Suetonius [pictured above] both cataloged the life of Julius Caesar, and both inspired Shakespeare’s play. The assassination of Caesar at a meeting of the Senate after a soothsayer's warning to "beware the Ides of March" has been famously dramatized by Master Shakespeare. And indeed, according to Plutarch a certain ‘seer’ did warn Caesar to be on his guard against a great peril on the 15th of March. When the Ides had come and Caesar was on his way to the senate-house, he greeted the seer with a jest and said: “Well, the Ides of March are come,” and the seer said to him softly: “Aye, they are come, but they are not gone.”

The Roman biographer Suetonius identifies the seer as a haruspex named Spurinna. A haruspex was like an augurer (augurers could determine the will of the gods based on the flight of birds) except that a haruspex was focused on ‘reading’ the liver of a sheep rather than birds.

Suetonius describes the scene this way: “In his way, some person having thrust into [Caesar’s] hand a paper, warning him against the plot, he mixed it with some other documents which he held in his left hand, intending to read it at leisure. Victim after victim was slain, without any favorable appearances in the entrails; but still, disregarding all omens, he entered the senate-house, laughing at Spurinna as a false prophet, because the ides of March were come without any mischief having befallen him. To which the soothsayer replied, ‘They are come, indeed, but not past.’” (Jul. 81) 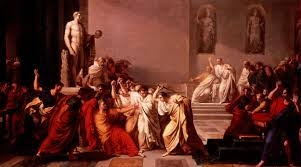 Plutarch's Parallel Lives catalogues the order in which senators dealt Caesar’s wounds during the assassination. For example, in Plutarch the senator Tillius Cimber (also known as Metellus Cimber) takes hold of Caesar's toga with both hands and pulls it away from his neck, which is the signal to attack. Plutarch also describes Casca as striking the first blow: "First, Casca struck him on the neck with his sword, a blow neither fatal nor deep, for naturally he was nervous at the start of so terrific a deed of daring, so that Caesar turned about, grasped the knife, and held it fast.” (Plutarch, Parallel Lives, translated from the Greek by Louise Loomis, 1951)

Shakespeare takes his prompt from Plutarch in having Casca issue the first blow: Casca’s line “Speak hands for me!” (III.1.84) indicates that he is the first to stab Caesar. Interestingly, Shakespeare changes the part about Metellus Cimber. Rather than pulling Caesar’s toga away from his neck, in Shakespeare’s play Cimber simply distracts Caesar with a petition, allowing Casca to strike.

Like Shakespeare, for our production we’ll be using Plutarch as a reference for our assassination scene but may not wholly adhere to his description. Check out the show next month to see our very own depiction of the most famous Ides of March!
Posted by The Shakespeare Tavern® at 5:34 PM