An Intern-Eye View: On Inspirational Kids, and Honesty in Acting 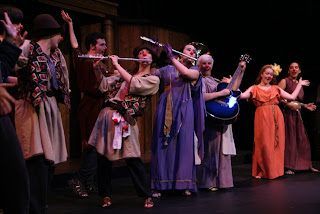 Sarah Palay, one of our Education Interns for the summer, worked in the classroom with the June session of Shakespeare Intensive for Teens. Here she writes about her experience:

As a new member of the Shakespeare Tavern education team, I entered my internship with little knowledge of what to expect. I knew the basics: I would be assisting in the classroom where needed, stage managing the final production, perhaps directing a monologue or a scene. What I did not expect was an experience that left me grippingly aware of the meaningful affect that a four-week Shakespeare intensive program could have on a group of high school students.

The Shakespeare Intensive for Teens (SIT) program allows students to discover themselves and learn what it means to be a thinking, feeling, and living human being in the world of the play. The program embraces what it means to be an individual and constantly encourages students to bring their personal experiences—pieces of themselves—into their work. Mary Russell and Matt Felten led the fourteen students on the four-week exploration, which culminated in a full-length performance of A Comedy of Errors. Matt and Mary chose to direct A Comedy of Errors as a clown show, and they introduced a series of clowning exercises that helped the students create clown personae for their characters...which was interesting in ways I'll discuss later.

What immediately struck me about the SIT students was their insatiable appetite for knowledge. These students thrived on information. While many students groan at the thought of conducting an in-depth analysis of Shakespeare’s works, these students cheered when they discovered they were about to delve into a three-hour class centered around the structure of Shakespeare’s text. The students digested any and every piece of information they could get their hands on and yearned for more. This attitude permeated the classroom for seven hours a day, five days a week. Every activity was a precious link to discovery. It was not only the students’ abilities to process and apply information that was invigorating to watch, it was that they craved knowledge, depth, and specificity in their work. They were continuously striving to learn and improve, a feature that I have found rare amongst many of my college peers. 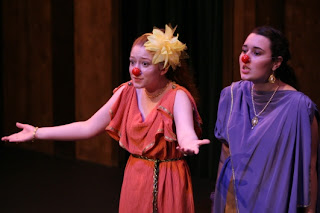 Their steadfast commitment to understanding sometimes reminded me of my own work as a young actor. I observed students as they attempted to find the “right way” to play the character or to say a line. In searching for what was right, students seemed to allow the fear of being wrong to block their creativity. But when the students stopped searching for what was right and freed their minds and bodies to explore, they discovered a far more personal engagement to the text and their characters, which resulted in the creation of truly compelling pieces of art. Various acting teachers and professors have often told me that I limit myself in the creation of something magnificent when I become paralyzed by the fear of being wrong. And while I understood what these professors were saying, the ability to watch the SIT students—miniatures of myself—battle with the same sort of fears that I have experienced reinforced this idea in a new way.

The clown work that Matt and Mary folded into the SIT curriculum particularly encouraged the students to free their minds and bodies and to release into a state of pure playfulness. The first week of the program, each student was presented with his/her very own red clown nose. The clown nose acted as a gateway into the play, and through multiple different clowning exercises, students came to cherish this little red token and the permission it granted them to release their inhibitions. As a newcomer to clowning myself, I found that my expectations of clowning certainly did not match the realities of the art form. Initially I thought, “I’ve seen the occasional circus. I know how clowns behave. They make us laugh with their over-the-top reactions and exaggerated gestures—that’s all there is to it.” I was WRONG. As Matt and Mary introduced clowning to the students and me, it immediately became clear that this art form was exceedingly different from what I expected. The secret? To clown effectively, one must be painfully honest. That means stripping away any emotional masks you might have created based on what you think your character should be feeling, and allowing whatever emotions you’re truly feeling to shine through. Discovering truthfulness in clowning was not an instantaneous effect, but rather a process—a process that produced a camaraderie amongst the students defined by trust. Over the four week intensive fourteen students, two teachers, and one intern went on a very special journey of self-discovery. 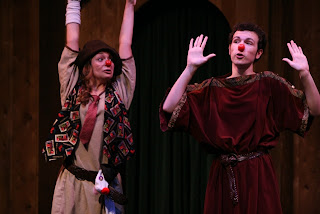 Being ‘honest’ on stage sounds easy enough, right? Well, not exactly. In order to be honest on stage, you must begin by being honest with yourself. Having experienced the necessity for honesty in my own acting work, I can testify that this is no easy task. It is incredibly difficult to stand on stage and to experience what it means to be vulnerable. I saw in these students a powerful struggle to embrace vulnerability. And when these students found those precious moments of vulnerability in their acting, they created something magical, something untouchable, something that was real and honest and uniquely theirs. The positive effects of this candidness certainly shone through in the final production—the students created a wonderful, honest, and fun rendition of A Comedy of Errors—yet the effects of this honesty extended far beyond a fabulous production. Through their willingness to express themselves honestly, these fourteen students created a haven, a place where they felt free to be themselves, express their individuality, play with one another, grow alongside one another, encourage each other, help each other, praise each other, critique each other, love each other.

The theater is a powerful place—it is a place of transformation. The Tavern’s Shakespeare Intensive for Teens takes a group of teenagers and allows them the opportunity to transform. But what I found unique about the SIT program is that the transformation not only occurs on the stage. I expected to watch the students transform into living incarnations of Shakespeare’s greatest characters, but what I did not expect was to witness the students finding new incarnations of themselves. I found it incredibly moving to watch these students grow, learn, and emerge as confident, articulate, powerful human beings ready to conquer. I am honored to have had the privilege to work alongside two incredible teaching artists and to learn alongside fourteen brave, mature, and introspective students. My experience here has truly been inspiring!

Posted by The Shakespeare Tavern® at 3:31 PM