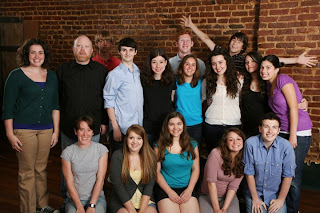 Anna Fontaine, one of our 2011 Education Interns for this summer and a former Shakespeare Intensive for Teens participant herself, talks about her experience so far:

It’s funny to think that for the past three summers I’ve spent the majority of my time plunging head first into Shakespearean classics. While that might sound kind of painful to some people, it’s actually been a highlight each year. I’m currently an intern with the Atlanta Shakespeare Company, where I’ve been privileged enough to lead and learn as stage manager/instructor for the Shakespeare Intensive for Teens program (aka SIT). It’s a program I myself was a part of both in 2009 and 2010. We have just completed the June session, which culminated in a full-fledged production of Julius Caesar, and I am still blown away by how much everyone, students and teachers alike, managed to accomplish. I think that’s a big part of what has led to my continual return to the Tavern: every time is a new and exciting adventure.
I played Shylock in The Merchant of Venice my first year in SIT, or, as we came to refer to ourselves, the “Mutants” of Venice. This was the first summer program that gave me a realistic view into the world of professional theatre while also providing a ridiculous amount of fun. I was surrounded by people who loved acting just as much as I did and who were all eager to experience as much as humanly possible. We learned from some pretty top notch actors, too. They constantly challenged us to broaden our minds and confidently think for ourselves. SIT gives more than just schoolbook lessons on prose and verse. Students have the chance to bring classic and complex characters to life. It wasn’t always an easy task, but by learning to make bold choices and trust our own decisions, we all managed to create a memorable performance.
Okay, so you’re probably thinking, “That sounds fine and dandy, but THREE summers? Is it seriously worth that much time?” The simple answer is…yeah! Last year I returned to SIT to be a part of the July production of As You Like It where I played Rosalind. Again, we had a chance to participate in all kinds of amazing classes, from clowning to stage combat to Rasa Aesthetics. All of these experiences allowed us to make new physical and emotional discoveries about our characters and ourselves. I was able to reconnect with some of my old friends and make some great new ones from all across the state. A new play with a new cast brought its own exciting and hilarious moments. For example, not only did we delve deeply into the status and relationships of our characters, we also discussed such things as the origin of the play’s title and pondered why it couldn’t have been, “like, four couples and one wedding, or whatever?” Because, let’s be honest, that would make so much more sense than As You Like It.
And I’m not the only one to keep returning to the Tavern. Each summer numerous students return to audition for SIT and many times they also come back as audience members, volunteers, interns, and even apprentices. I think that speaks volumes regarding the quality the ASC manages to pack into its summer programs. What has been especially great about seeing both new and old faces each year is how much SIT allows its students to grow in just four short weeks. Many leave having gained a new level of confidence, courage, and achievement.
Likewise, as an intern this year I have already gained a ton of leadership experience, organizational skills, and theatre game knowledge. It has been really enlightening switching from student to teacher, and I don’t know many places that allow for that kind of opportunity. For the rest of the summer I’ll be taking an in-depth look into the administration side of the Tavern. As I learn all the behind-the-scenes details that allow this place to run smoothly, I know the July session of SIT is hard at work on Romeo and Juliet. And, as evident by our last SIT production, it’s going to be quite a show because, honestly, these kids just keep getting better and better each and every year.
Posted by The Shakespeare Tavern® at 3:15 PM