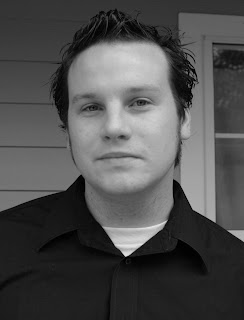 How did you get into acting? Where did you go to college?
I was in church plays when I was in elementary school, but I really got into acting in high school. My first role was the Ray, the detective, in Rebel Without A Cause. I realized that it was easier to get noticed by girls if you were working on a play with them. Plus I really needed the compliments on my performances at the time.

I went to college for the first two years at the University of North Florida in Jacksonville. I was studying journalism as it seemed like a more practical career path. It proved to be too dull and restrictive for me. I decided I should study something that interested me instead so I decided to study Theater at Florida State University in Tallahassee. I got my degree in December 2005, stayed in town to finish my last play (Amadeus) at FSU and then moved to Atlanta.

What is your favorite non-Shakespeare Role that you have performed?
I really enjoyed playing the Herald in the college production of The Persecution and Assassination of Jean-Paul Marat as Performed by the Inmates of the Asylum of Charenton Under the Direction of the Marquis de Sade (you can call it Marat/Sade by Peter Weiss). It was especially interesting because I was playing a mental patient who was in turn playing the narrator of the play within the play.

What is your dream role in Shakespeare?
I, of course, would love to play Hamlet before I get too old. I am also interested in Michael Cassio and Iago in Othello and Orlando in As You Like It.

What is your dream role in non-Shakespeare?
I couldn't say specifically what my dream role is of all time. I don't know what kind of older person I will become so I have a mostly limited vision of characters I would like to play at my age now. I would love to be Algernon or Jack in The Importance of Being Earnest, I would love to play Wolfgang in Amadeus. I would be anything in anything by Pinter, Stoppard, Beckett, LaBute, Durang, honestly anything pretentious.

What challenges you as an actor?
The obvious answer is the economy. Not knowing whether not I can afford to be an actor or if I will be someone with a minimum wage job that lets me take off whenever I want for rehearsal. Nothing really romantic there, but its definitely the biggest challenge.

What would you like to do in the future?
I love film. I just know better than to try and cattle call my way into acting. I am much more inclined to write my own material and give myself the best roles. Shakespeare did it and I think he had it right.

Tell me about your role in Canterbury Tales
I guess what's interesting about the Miller is that there is the Miller character at the top of the show, who is drunk but somewhat in control and persuasive, then he comes back in his rival's (the Reeve's) tale and is thereafter described as kind of an ass at the butt end of a joke he told about the Reeve.

I also enjoy cutting a rug, as the kids say, in the Merchant's Tale as Sir January.

What is one thing that a lot of people don't know about you?
My younger brothers are triplets. I often site this as one of the reasons I got into acting. My parents had a very long stroller built to accommodate three babies that was quite a sight rolling through the malls. I was three when they were born and old enough to be walking on my own at that point. I would walk next to the stroller and people would always come up to my parents and ask if they were "twins." ( My parents would politely point out that there are three of them and only about half the time would anyone notice the mistake). And I was ignored. So my parents had a bright yellow T-shirt made with big block letters that read: "I'm the big brother." So, that might be why I crave the limelight.

-Redd Horrocks-Maier
Posted by The Shakespeare Tavern® at 8:32 PM

I just saw The Canterbury Tales on Friday night, and Mr. Niedzwiecki was one of my favorite players. Great job!