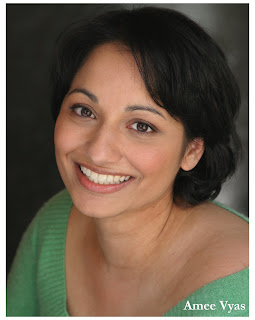 Amee Vyas has been with The Shakespeare Tavern since the original Apprentice Company in 2002.

Amee graduated from New York University with a degree in English. After living in New York, she chose to move to Atlanta because it was cheaper and she was tired of being broke. The original Apprentice Company were asked to write essays about Shakespeare as part of their application, and as a strong writer, Amee was very encouraged by this. She was called back based on her essay and auditioned with David Weber and Joshua Howland. The three of them were among the first group selected to be Apprentices at the Tavern.
On the last day of her apprenticeship on the way to her scene showcase, Amee got into a car accident and didn’t think she would make it in time for her show, her car limped over to the Tavern and she managed to get on stage just in time, and did “awesome”.

After her apprenticeship was over, she was called in to audition for Romeo and Juliet, and thus began what she calls her “Juliet Odyssey”; she has played or understudied Juliet every year since then either here at the Tavern, or at another theatre.
Amee made plans to leave Atlanta for California in 2004, but instead was brought on as a full time staff member and was cast in six plays, many of them in lead roles.

Most recently, Amee played Viola in Twelfth Night in January, a role she will reprise in the August-September play repertory.

Her favorite roles so far have been playing Viola in Twelfth Night and Adriana in Comedy of Errors. She particularly enjoyed the latter role because she felt she trusted her own strengths and instincts, and that there were some great unexpected parts of the play that she felt she owned.

Amee would like to one day play Margaret in the Henry VI plays, because she loves how wicked she is. She says she “adores her biting consonants”. She also likes the idea of playing in a 4-play arc. Another dream role for her would be as Ariel in The Tempest.

When I asked her what her favorite quote was, she replied that she didn’t have one because Shakespeare has a saying for everything. In fact the word that resonates most with her is just “Shakespeare”.

Amee’s real acting dream is to perform in a West End show in London. She says that she wants to do it even if she has to wait until she’s 85. She prefers stage to film. Film has more realism and she feels as though theatre holds more possibilities.

Amee will be understudying the role of Hermia in A Midsummer Night's Dream in July, and playing Viola in Twelfth Night in August and September.

Things you didn’t know about Amee?

She was a pool shark when she was five.
Chris Noth thinks she hates him, she bumped into him four separate times when she lived in New York.
She once mistook Ethan Hawke for a homeless guy.
She was separated from Prince Harry by security in a club in England because she made a scene.

He thinks she did it on purpose? (Bumped into him I mean). Lucky woman!