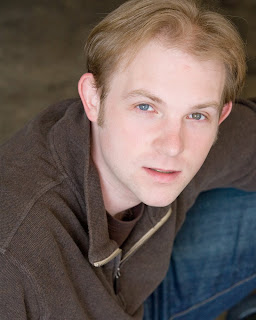 It’s not very often that when I ask people about their history with the Shakespeare Tavern they tell me they’ve wanted to work here since they were a kid, but Matt Nitchie is one of those people who constantly amazes me, so I shouldn’t have been surprised.

When he was eleven, Matt started coming to the Shakespeare Tavern with his parents. Even as a child, Matt considered the Tavern the “Pinnacle of Atlanta Theatre”, and he wanted to be an actor and work here.

After getting a Bachelor of Arts degree in Theatre, he joined the third Apprentice Company, known as the Cicadas because they were the “loud and obnoxious ones”. Matt has been on the stage at the Tavern on and off since then.

Last year, Matt had made a goal that he was going to do a musical. He says that he loves musicals because he enjoys the idea of “carnivalesque expressions of emotions” and he feels that musicals force creativity. Shortly after he had decided he wanted to be in a musical, he was cast as Cliff in our production of Cabaret.

Matt has always really enjoyed playing the crazier people or the monsters. This might explain why he would love to play Caliban in The Tempest. He would also like to play Edgar in King Lear because of his transformative nature.
He would also like to play Hamlet, because Hamlet is self-indulgent… a role he was not interested in until he got a chance to do the To Be or Not To Be speech in class and truly explored the character.

Matt also likes puppetry. He likes the idea of not adhering to an idea of realism. He’d also like to work in film.

Matt’s favorite role in Shakespeare so far was as Malvolio in Twelfth Night earlier this year. When I asked what he liked about it, he explained to me that he was naturally very shy, and that playing Malvolio was living out the ultimate shy person experience. Malvolio goes from being a very shy and proper person, bottling up feelings that he has to being given the opportunity to let everything out (in the famous Yellow Stocking scene). Matt describes the feeling of going on stage (and excuse me while I paraphrase here) as a bowling ball hitting a trampoline. He says before he goes on he gets nervous and even a bit scared and as it gets closer and closer to his cue line he gets very very tense and then as soon as he walks out on stage it’s like a bowling ball on a trampoline and it comes together and he never feels more alive. To hear him describe it is quite amazing, as you can tell he is an incredibly brilliant, articulate and talented person. He says that acting is completely addictive.

Another interesting role for his recently was as Demetrius in A Midsummer Night’s Dream. He really enjoyed working with Mary Russell and getting the opportunity to mess around with her and be as obnoxious and annoying as possible. He enjoyed the opportunity to “throw feasibility to the wind”. Matt feels that he is starting to really gear his performances towards his personal strengths.

Matt’s acting idols include Gary Oldman and Ian Holm. He says he liked the “old crazies”.

In Much Ado About Nothing, Matt will be playing Don Pedro, the Prince. He describes his character as the “nice normal guy” and says that it’s hard to play normal. He is interested in the Royalty aspect of this character and feels that he will be finding the status of the character more and more as the production continues.

After Much Ado About Nothing, Matt will be playing Demetrius in A Midsummer Night’s Dream in July, then he will be reprising his role of Malvolio in Twelfth Night in August and September.

Something you don’t know about him? Here are two things:
He really really likes Tabasco Sauce, and he gets spooked by his own ghosts.

Other previously Featured Actors in Much Ado About Nothing include:

Posted by The Shakespeare Tavern® at 4:36 PM