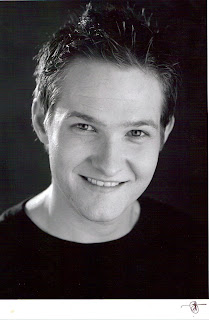 Since 2003, Nicholas Faircloth has been an active member of the Shakespeare Tavern family. He is currently playing Mercutio in Romeo and Juliet, a new role for him in one of our most popular plays.

Nick has lived in for most of his life. After high school he looked into going to Northwestern and NYU, but after traveling to Europe, he decided to apply and was eagerly accepted to the Liverpool Institute of Performing Arts (LIPA) in . LIPA was a brand new school with students from all around the world. Anthony Hopkins and Paul McCartney were regular guest teachers. Nicholas received a BA with Honors in Performing Arts. He came back to the and began performing in the area, and started to randomly meet other members of the Tavern family. In 2003, he auditioned for the second Apprentice Company. At callbacks, he ran into Kirk Harris Seaman, who he had gone to High School with and hadn’t seen for many years. Both Kirk and Nick became members of the 2003-2004 Apprentice Company, and two years later Nick became a member of staff here.

Nick says that his favorite role is usually whatever role he is immersed in at the time. He particularly enjoyed playing Howie in Our Town in 2004.

Nick likes to let things happen in his life. He doesn’t have any set plans to go into film or move to other cities, he likes to wait and see what opportunities cross his path.

His dream role in Shakespeare would be to play Hamlet. He has played Laertes before and says that he would love to see the play from the other side.

On playing Mercutio, Nick loves that he is a he is playing a performer. He finds that Mercutio is a reactor, and talks at and not to people. Nick believes that Romeo is “Love,” Benvolio is “the Soul”, and Mercutio is “the Reactor”. He also admits to finding the bawdiness fun.

Nick’s idols are Al Pacino “I could watch him read the phone book”, Robert de Niro in seventies, Gene Hackman, Daniel Day Lewis, and Sean Penn. He likes people who know how to behave.

Something you may not know about Nick? As a kid one of his first roles was as a Mexican bandito. He also confesses that he cries….. a lot.

Nicholas will be on the Tavern stage again in Of Mice and Men in March, and in Rosencrantz and Guildenstern are Dead as Rosencrantz in May.

Posted by The Shakespeare Tavern® at 4:07 PM

Nick did a great job as Mercutio at the performance I saw. I chaperoned my students on the 1/29 performance, and we all enjoyed it very much.