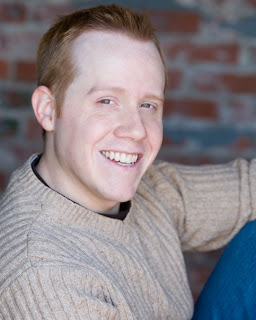 Since the first grade, Andrew Houchins has been involved in plays. His first role ever was as Uncle Albert (who loved to laugh) in Mary Poppins. Since then, he was involved in everything he could be during middle school and high school. He received a degree in Theatre with an emphasis on Performance from UNC Greensboro. His first role as a freshman in college was playing Hamlet, a role that he would love another chance to play.

Andrew moved to Atlanta in 2003. He worked at Agnes Scott and with the Neighborhood Playhouse before becoming an Apprentice in 2005, making him a Worker Bee. He says that he used the Apprenticeship as a foot in the door.

Andrew’s favorite role thus far was as The Bastard in King John, which is currently playing in our Repertory. He says that it was nice to cut loose, and that he enjoyed “speaking truth to power” as a non-legitimate member of royalty. He also enjoyed playing a more serious role as he tends to play the clowns.

In non-Shakespeare, Andrew enjoyed playing Huck Finn in Big River, his favorite musical. To him, Big River is the “story of what it means to be human and American”.

In the future, Andrew would like to play Hamlet again, as well as the title role in Richard III and Bottom in A Midsummer Night’s Dream.

His favorite quote comes from Hamlet:

Andrew loves theatre buildings. He loves all of the little idiosyncrasies like how the temperature of a space feels different depending on the size of an audience. He would love to own a theatre building some day and also enjoys teaching.

Something you didn’t know about Andrew? He marched in Washington with Rosa Parks at an anniversary celebration. He was there with his father’s union.

Andrew is playing The Bastard in King John through the end of September, and will be playing several parts in Anthony and Cleopatra and Henry VI in October and November.
All of our previously featured actors are performing during September! Check out their interviews here.
Posted by The Shakespeare Tavern® at 1:44 PM No comments: